Camilla Tassi is a member of the class of 2015 and 2016, participating in the Reilly Center for Science, Technology, and Values' original education program, The Reily Five Year Dual-Degree Program in Arts and Letters / Engineering (AL/ENG). Through this program, she has pursued and excelled in both music performance and computer science & engineering, two seemingly disparate disciplines that she has managed to pull together with impressive results. As of January 2016, she has already been offered her choice of a job in engineering/computer science, one in music, and the opportunity to pursue a graduate degree.

Camilla, in her own words:

Through the Reilly Dual Degree program I have been able to study, fully, two seemingly unrelated areas of interest.

When I was looking at universities, I knew I wanted to study both Computer Science and Music. I visited other colleges, but many discouraged the combination. Notre Dame, on the other hand, fully supported it.

In my research under Dr. Patrick Flynn, Professor of Computer Science and Engineering, we've looked at merging the two fields even more by working on a computer program that analyzes the beat patterns and movements of a music conductor's joints. I believe there are so many unexplored opportunities that use programming and technology to aid in music instruction and analysis - it makes for such an exciting field. Exploring these two fields has allowed me to seek out ways to help out using my tech skills. I've enjoyed designing websites for two performing arts groups on campus (The Notre Dame Chorale and Liturgical Choir) and creating publicity material through graphic design for Department of Music recitals and Campus Ministry. There were days where I'd be singing in opera rehearsal, attending music theory classes, performing tech research, and cantoring at the Basilica of the Sacred Heart - all before heading to the engineering library to work on a programming assignment with other students. And that covers just a few of the things I've been able to be part of thanks to my dual course of study.

I've also had the chance to team up with Dr. Jay Brockman, Professor and Associate Dean of Community Engagement and Experiential Learning and the WAVES/Wild Sound project, where we create new electronic instruments for professional groups such as Third Coast Percussion to take and perform with on their European tour. Not only that, but thanks to these electronic instruments we reach out to local elementary and middle schools to teach concepts such as wave shape and how sound is processed through the approachable and universal appeal of music. 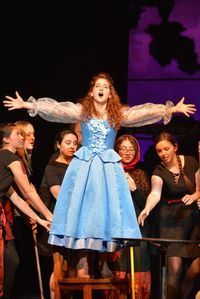 These projects have instilled in me a sense of initiative that allowed me to also explore the producer role for classical music performances. Last spring, I had the opportunity to put on a student-led performance of Handel's baroque oratorio 'La Resurrezione', funded through grants that I applied for at Notre Dame. The project saw the collaboration of three departments: Romance Languages and Literatures, Music, and Theology. I would plan rehearsals, cast singers as well as orchestra musicians, create an original translation of the Italian work, allocate budgets, and coach musically. I believe there are very few schools and programs that would allow a student to pursue an independent project of the sorts. To view, click here.

I could not be more thankful for the breadth of knowledge that the Reilly Dual Degree exposed me to and the incredible network of students and faculty I have built thanks to it. The five-year timeframe of the Reilly Dual Degree also enabled me to further pursue another interest, my declared Italian Studies Minor. Through the Nanovic Institute, I was able to conduct research in Florence, Italy, to research and transcribe original manuscripts at the Cherubini Conservatory.