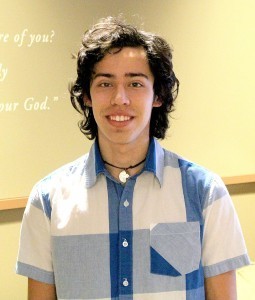 Jon Schommer is a 2014 graduate of the Reilly Arts & Letters/Engineering Dual-Degree Program, with majors in Civil Engineering and the Program of Liberal Studies (PLS). He was named a 2014 Reilly Scholar in recognition of his exemplification of the highest ideals of the dual degree program. Jon is also the recipient of the Newman Civic Fellow Award Recipient (2012) and the Richard J. Wood Student Community Commitment Award (2013).

Jon has participated in the Notre Dame Engineering2Empower program, which facilitates access to housing by empowering local entrepreneurs to deliver engineered urban housing in the free market within informal economies. In 2013, he served as their Community Engagement Team Leader on site in Léogâne, Haiti. Prior to this, Jon was part of a delegation of students sent to Joya Grande, El Salvador in 2010 to learn about post-disaster reconstruction in the wake of Hurricane Ida. In summer of 2011 he led low-income home repair worksites in rural West Virginia with the non-profit Nazareth Farm, and in Summer 2012 he Volunteered with the Missionaries of Charity in Kolkata, India working in a home for orphaned children with developmental disabilities and in a home for the dying.

"I am incredibly grateful for the Reilly Center dual-degree program and the opportunity it has given me to explore engineering through the hermeneutic of the humanities and vice versa. More specifically, being able to write my senior thesis for the Program of Liberal Studies about research I did with Engineering2Empower in the civil engineering department allowed me to gain a better understanding of the impact and influence engineering has on people and the important considerations to be accounted when designing a structure that is woven into the life of another."

In addition to his scholarly activities, Jon is also an active member of the South Bend community. He is a student leader for The Bridge Project, which aims to improve relations between South Bend and its college campuses. In his spare time, Jon organizes local concerts and promotion for local artists and even fronts his own band, Jon Schommer and the Town Cuties.