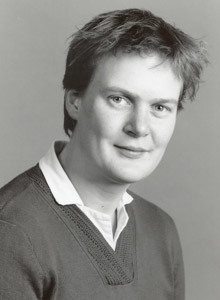 Hilary summarizes her argument in the abstract of her paper: “The CPT theorem of quantum field theory states that any relativistic (Lorentz-invariant) quantum field theory must also be invariant under CPT, the composition of charge conjugation, parity reversal and time reversal. This paper sketches a puzzle that seems to arise when one puts the existence of this sort of theorem alongside a standard way of thinking about symmetries, according to which spacetime symmetries (at any rate) are associated with features of the spacetime structure….The paper then suggests a solution to the puzzle: it is suggested that the CPT theorem arises because temporal orientation is unlike other pieces of spacetime structure, in that one cannot represent it by a tensor field.”The John J. Reilly Center for Science, Technology, and Values, along with the Graduate Program in History and Philosophy of Science at the University of Notre Dame and the Advisory Committee of the James T. Cushing Memorial Prize in History and Philosophy of Physics are pleased to announce the award of the Cushing Prize for 2012 to Dr. Hilary Greaves, University of Oxford.  She is being honored for her paper, “Towards a Geometrical Understanding of the CPT Theorem,” published in The British Journal for the Philosophy of Science in 2010. The Cushing Prize carries a $1000 award plus an invitation to deliver a lecture as part of the History and Philosophy of Science Colloquium at the University of Notre Dame.

Hilary was nominated for the Cushing Prize by David John Baker (winner of the Cushing Prize for 2010), who describes the importance of Greaves’ paper: “The "CPT Theorem" paper constitutes a major step forward in the conceptual understanding of this foundationally important but ill-understood result in mathematical physics.  The deep puzzle Greaves attempts to tackle is why (as the theorem establishes) Lorentz invariant quantum field theories must also be invariant under the combination of three discrete symmetry transformations: charge conjugation (the interchange of positive and negative charge), parity inversion (aka mirror reflection) and time reversal….She resolves the puzzle by showing that our use of tensors to represent fields in Minkowski spacetime is the true source of CPT, because it is impossible for a Minkowski-space tensor to represent a temporal orientation.”  Baker lauds her overall contribution to philosophy of physics in these terms: “Greaves has been publishing first-class research in the philosophy of physics since her first year of graduate school….It is no exaggeration to say that she is probably the most exciting researcher to earn a doctorate in the philosophy of physics within the last five years.”